Interweb sources seem, by and large, to agree that at least 90% of the Earth’s crust is made of silicates. Starting in a molten magma, silicon  atoms join up with oxygen atoms to create the basic building block of all silicate minerals, the tetrahedral molecule SiO4. On behalf of his brothers, a silicon atom explains:

We’re the kings of our castles: four oxygens surround us,
Each bound by strong covalent bonds  we radiate around us.
Each O is like a turret that is negatively charged –
And that’s the way our empire is easily enlarged:

Our tetrahedral structures can stick themselves to others!
And in the spaces in between reside our cation brothers:
For olivine, magnesium and iron together blend
In relative proportions that on the magma’s mix depend: 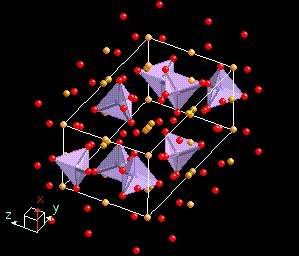 That’s where we atoms started – all runny , hot and jumbled;
But as we neared Earth’s surface, into these shapes we tumbled.
We silicates are common, for in diverse array
We make up most of Earth’s thin crust – so silicates rule, OK?

This entry was posted in Uncategorized and tagged Minerals, Molecules, Olivine, Silicates. Bookmark the permalink.